We had my 4 yr olds birthday party this past weekend. I was so happy to host and decorate.
I love a good party!
The dessert table. On the table, was butterfly cupcakes (from Hello, Cupcake!), butterfly shaped cinnamon sugar cookies, various pink candies, and the party favors.
I made the "S" with cardboard, moss, and hot glue. I will post a tutorial later this week.
I also stamped the napkins with the pink butterfly theme. 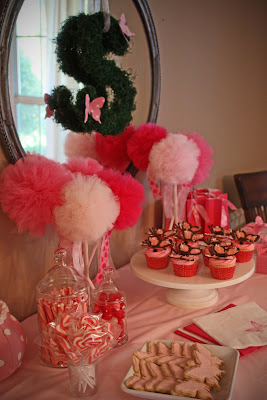 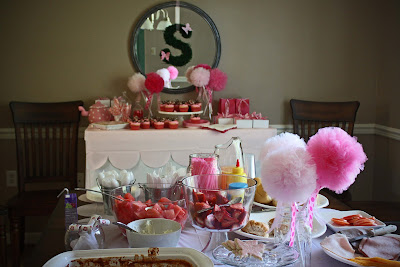 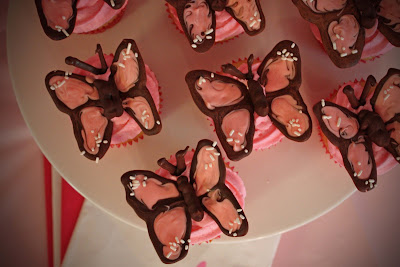 I had two different party favors. One for the 4 yr olds and one for their baby siblings. Inside the boxes were bouncy balls, small markers, pad of paper, stickers, temporary tattos, and candy.
The baby's had a small plush toy I made...pictures of that later.
I made the fabric butterfly tops. I will be selling those in my shop later this week. 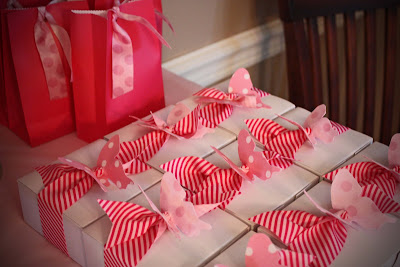 The kids also received a tulle wand. I found the tutorial here. I thought it made a great favor that was also used for decoration - again, more bang for your buck. 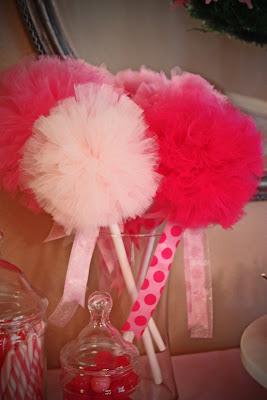 I even made pink strawberry jam for the parents to take home. It's just a good excuse to make lots of stuff and give it away. Again, I will post more about the jam later this week. So much to post this week!

If you have any question, just put them in the comments. I will try to respond to them on the next post. Also, I did make the pink polka dot felt teapot that is on the dessert table too. It's for my best friend's birthday tea party coming up next week. I don't think I'll be selling them in the shop but I can do custom orders.

Thank you so much for visiting. I appreciate you taking some of your time to come check out my little crafting world. I named the blog what it is because I work from one day's to-do list to another.

My mom taught me how to sew when I was a young girl and I have been crafting ever since. I have been sewing my felt food since 2007. I wanted something cute and safe for my daughter to play with for their kitchens. It has just taken off since then and I am so thankful.

All the patterns are made by me and ideas come from late night thoughts, friends, family, and customers.

You can find my food in the Chicago Children's Museum. I have been working with them for 3 years. I have also been featured in DDN Cucine International Magazine along with numerous blogs.